Do you know the Shikoku 88 temple pilgrimage,"Ohenro"? Here is infomation about Ohenro.

About the Shikoku Pilgrimage

The Shikoku Pilgrimage or Shikoku Henro is a pilgrimage to the 88 temples on the island
of Shikoku in Japan. It´s believed that all the 88 temples were founded or restored by the
famous Buddhist monk Kukaki, also posthumously known as Kobo Taishi. The pilgrimage
is traditionally completed on foot, but modern pilgrims use cars, taxies, buses, bikes or
motorcycles. The walking course takes approximately 50 days to complete.

Around the year of 1140, the pilgrims were first mentioned in Konjaku Monogatari or ‘An
Anthology of Tales from the Past´. It says that young ascetics willingly visited the coasts on
Shikoku, consisting of 4 provinces of Iyo (the present Ehime Prefecture), Sanuki (Kagawa),
Awa (Tokushima) and Tosa (Kochi). It was probably done in the asceticism to “Ne no Kuni”
or Hades. In that era, the roads and areas along the coasts of Shikoku, remote from the
capital, was called “Hechi (辺地) or an out-of-the- way place”. This Hechi (辺地) would be
turned to Heji (辺路), Hen (偏), and finally to Henro (遍路). 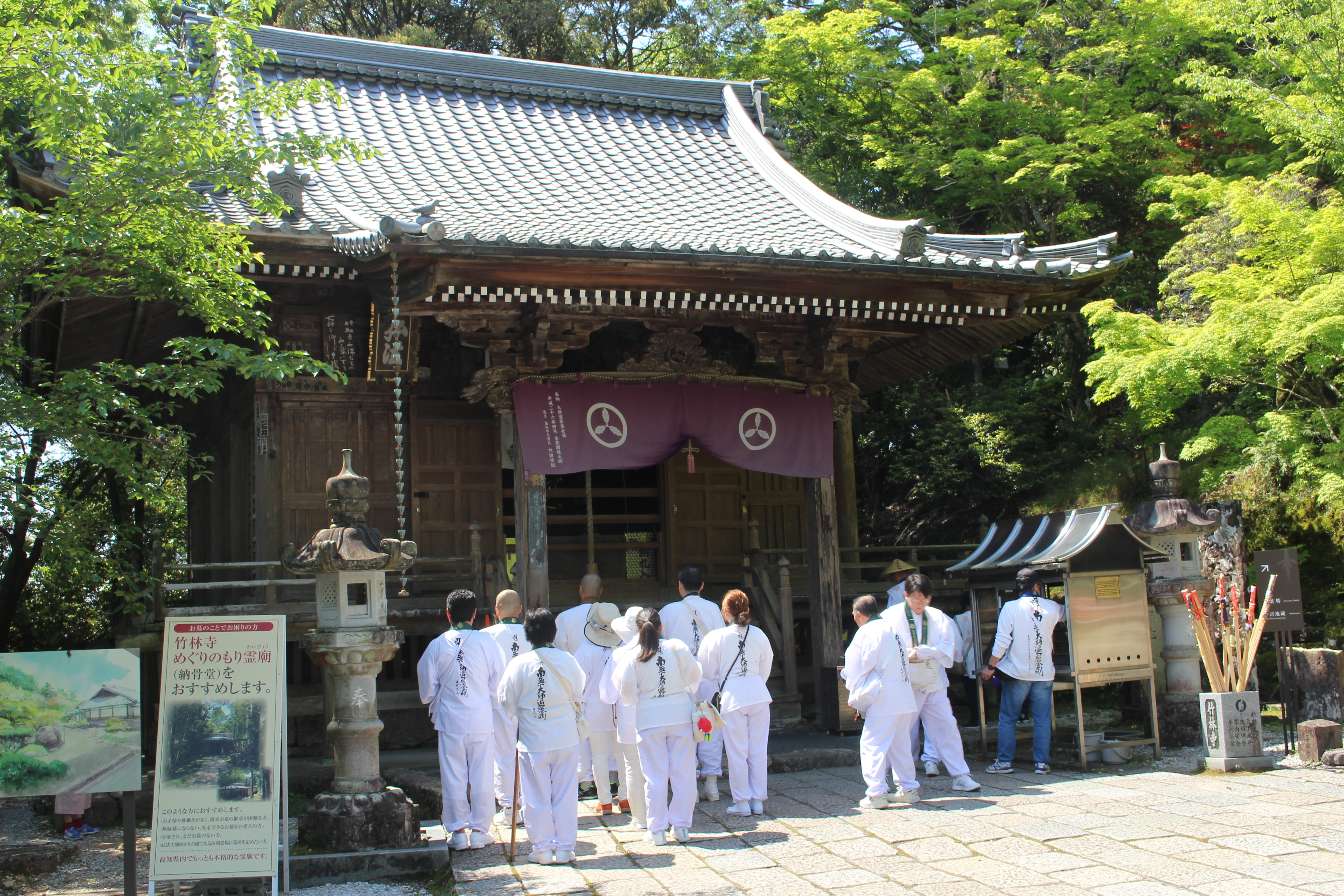 「Osettai is our customs to support 88 temple pilgrims. Some people along the
pilgrimage roads offer a rest place and foods for free. From ancient times, ascetics are
even given donation, called “ofuse”, by people wishing to be blessed by Buddha
through their actions of support. Some asked the ascetics to give a prayer instead of
them and some believed the ofuse itself would be a kind of charity act.
In the Edo period (1603- 1867), the almsgiving services were firmly established as it
got popular for not only the ascetics but also common people to take the pilgrimage.
This would be the origin of “Osettai”. Since then, it's got a big support for the pilgrims
on such serious distances and has much contributed to the sustenance of the Shikoku
pilgrimage. For this background, it is not exaggeration to say “Shikoku is the only place
where this tradition of Osettai exists so deeply”. 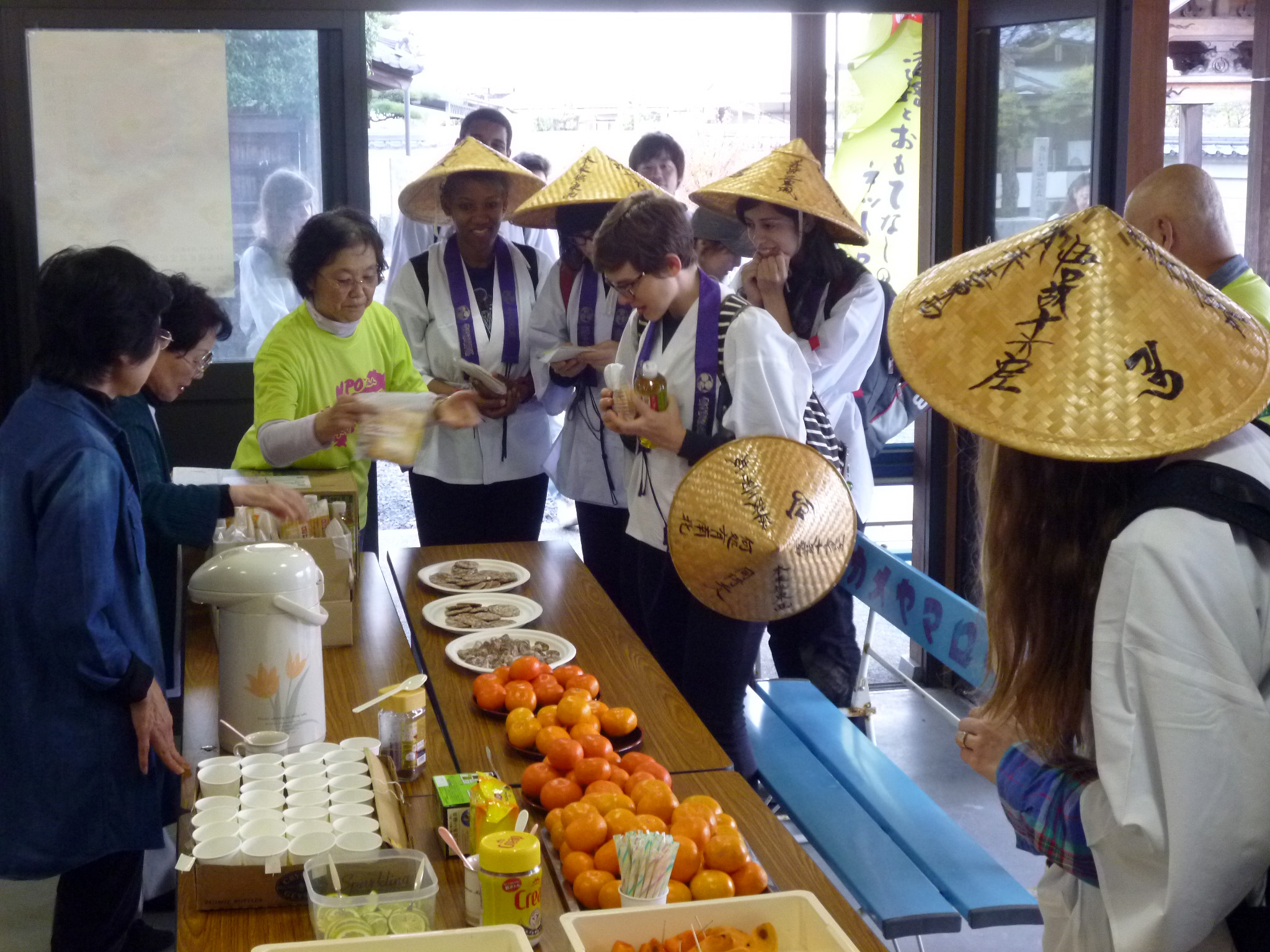 Kukai was born on 15 June 744 in the present city of Zentsuji in Kagawa prefecture of
Japan. At age fifteen, he traveled to the former capital and at eighteen, he
entered the government university. While he studied the Chinese philosophy and
ideology there, he began to doubt the careerism laid in the higher education. At the age
of 24, he published a literary work Sango Shiiki, which states his idea “Buddhism is the
highest teachings”. Then, he went into religion and sought out isolated mountain
regions for ascetic training.

One night, Kukai had a dream which told him on ‘Dainichikyo or Mahavairocana Sutra'
under the east tower of Kume temple locared in Yamato (modern day Nara). It's the
scripture which contains the ultimate Buddhism doctrine “Mikkyo or Vajrayana
Buddhism”. Tough he soon managed to obtain a copy of this sutra, he immediately
encountered difficulty. Much of the sutra was very cryptic and he could find nobody
who could explain the text for him. This resolved him to go to the capital of Chang'an
(present day Xi'an) of Tang Dynasty China to study the text there.

In July 804, the 31-year-old Kukai took part in a government-sponsored expedition to
Chang'an from the Tanoura port in Nagasaki. It took six months for him to arrive in
Chang'an as the journey was not easy on stormy sea and painful distance by land.
There, he visited from temple to temple to look for a master of Mikkyo. And eventually,
he met Master Huiguo the man who came from an illustrious lineage of Vajrayana
Buddhist masters at the Qinglong Monastery. Under Huiguo's guidance, Kukai received
the final initiation in a few short months, and became a master of the esoteric lineage
with named “Henjo Kongo”. As Huiguo instructed Kukai to return to Japan instantly and
spread the esoteric teachings there for the nation's fortune, Kukai left off the 20 years
studying plan in China and was back in Japan two years after his departure.

After the return to Japan, Kukai founded the Shingon or “True Word” school of
Buddhism and acted based at the Toji temple in Kyoto and the Mount Koya retreat in
Wakayama Prefecture. He was not only famous for the acknowledged master of
esoteric Buddhism but also as a civil engineer, poet and calligrapher. On 21 March
835, Kukai died at the age of 62 on Mt. Koya and legend says he entered into an
eternal samadhi.
*The posthumous name Kobo Daishi (means “Great Master”) was granted by the imperial court 86 years after his
death, due to the efforts of Kanken, the 4th patriarch of the Mt. Koya retreat. 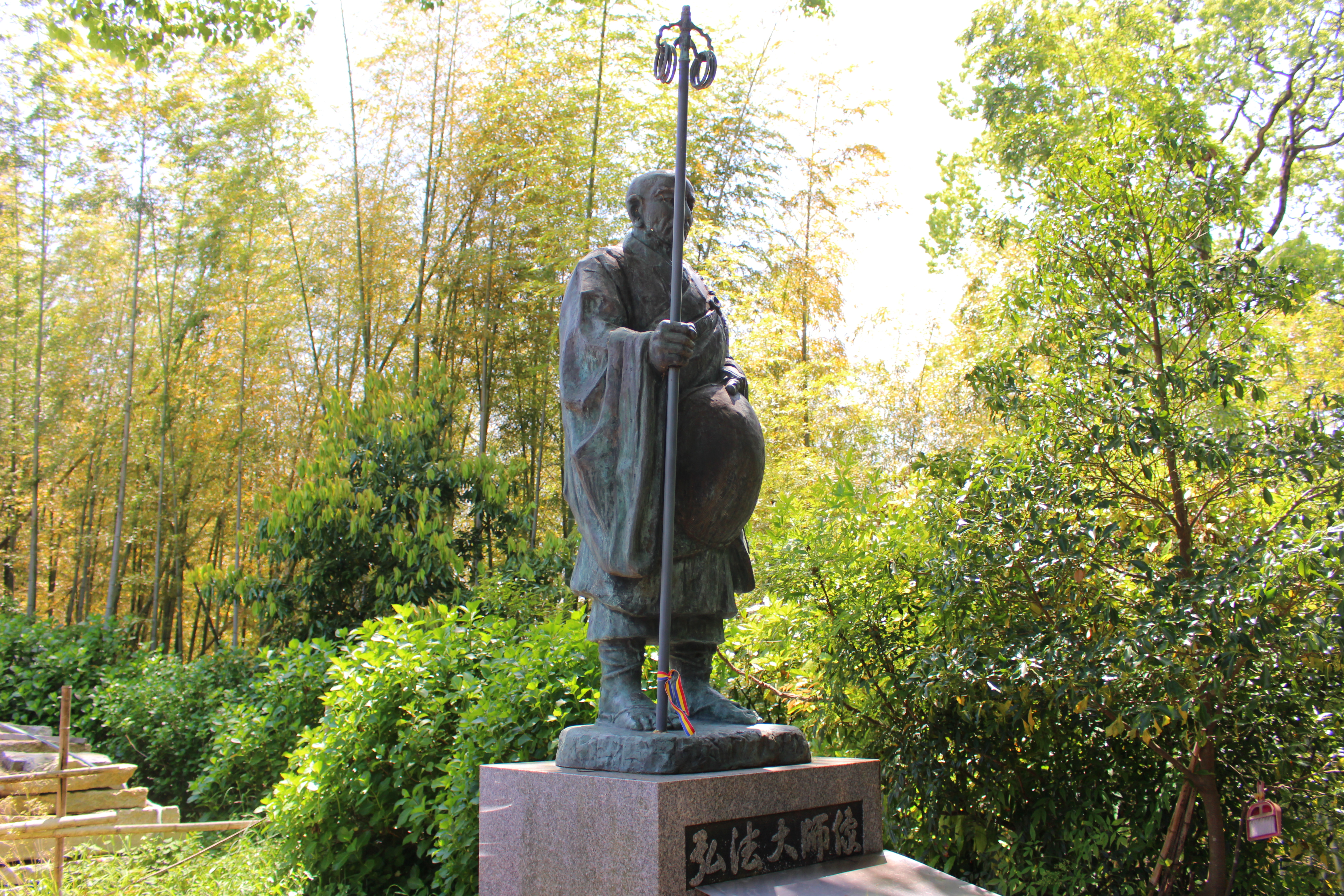 Buddhism is a family of beliefs and practices, based on the teachings of Siddhartha
Gautama, commonly known as the Buddha (born as a prince of Shakya clan in
Lumbini, which is in present day Nepal).

About 2,500years ago, Siddhartha Gautama was spiritually awakened in the Indian
subcontinent and became the Buddha; meaning “Awakened one” or “Enlightened One”
in Sanskrit. Buddha's teachings provide instructions on how to understand the true
nature of phenomena, end suffering, and achieve nirvana, which indicates to be a
Buddha.

Two major branches of Buddhism are broadly recognized: Mahayana literally “Great
Vehicle” and Theravada “the Ancient Teaching”. Mahayana traces its origin to
Gautama Buddha in India. It spreads throughout East Asia and is practiced today
mainly in China, Korea and Japan. It came to Japan in the sixth century. Shingon is
one of Mahayana Buddhism schools. On the other hand, Theravada has been the
predominant religion of Sri Lanka and Southeast Asia like Burma and Thailand.
Shingon, founded by Kukai, is also categorised as Mikkyo or Vajrayana Buddhism/
Secret Mantra. It's believed to instruct the secrets of Buddha's teachings. 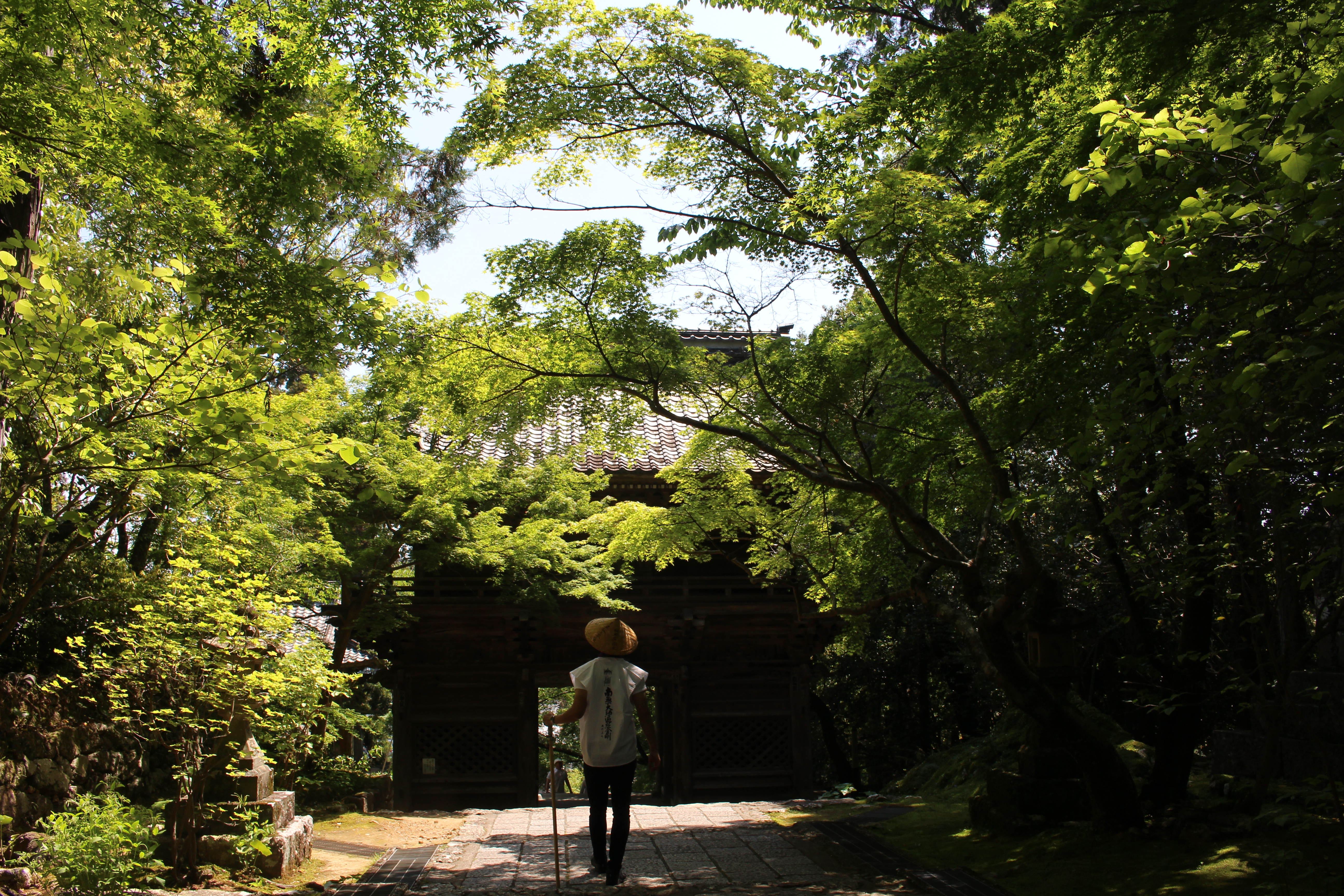